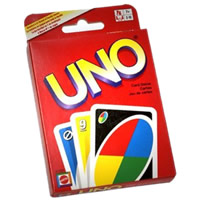 How To Play Uno Cards (Instructions) 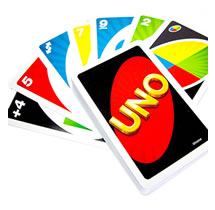 Uno Cards is one of the most popular and well know card games where players try to be the first one to get rid of all their cards. Uno is very easy to learn how to play and is suitable for almost all ages. You can take these cards with you and is a great travel game for multiple people. Similar to Monopoly, Uno has tons of different themed versions from movies, to holidays to even sports teams. Literally hundreds of versions to choose from or collect.

Uno Cards has a lot of fun twists to it including skip cards, draw two cards, draw four cards, wild cards, and reverse cards. Also, don't get caught with only one card in your hand without saying "Uno!" With a unique game every time you play, Uno is a challenging but also a luck based game that is a favorite to many.

It seems like everyone has their own twist on the Uno game rules. Some say you can stack draw cards while other don't. Some let you play after you draw while other say your turn is over. We've even seen some play Uno with a bit of cheating involved - if you can get away with playing more than one card down without being caught, it's fair game. Long story short, be sure to know how everyone in your group is used to playing so there won't be any arguments on how to play.

Uno is just one of those must have card games that sometimes in a kids first real card game. The simplicity of the game along with the fun random nature always leaves you wanting to play for more. Some games take seconds, while others can take much longer with stacks and stacks of cards in each player's hand. Play this game with your friends and family and buy the card game Uno today!

The game Uno Cards should come with the following components. These are based off of the original game and don't include components from any expansion packs or different editions.

To be the first player to score 500 points. You'll get points by getting rid of all your cards first. The cards remaining in your opponents' hands will earn you additional points.

Perparation: To get the game ready, each player will pick up a card from a shuffled deck. Whomever has the highest card value will deal seven cards to the rest of the players. Action cards have no value and are treated as a zero. After the cards are dealt, the remaining cards are placed face down as the draw pile. The discard pile is created by turning the top card over from the draw pile and placing it next to it. Player to the left of the dealer starts.

Game Play: The goal of the game is to get rid of all your cards first. You do this by matching the card on top of the discard pile either by number or color. For example, if the card is a red 5, the player must put down a red card or any color 5 card. On your turn, wilds can be used on any card and the player using the card chooses what color the next card will be.

If the player can't place a card on the discard pile, they must add a card to their hand from the draw pile. If they can play that newly picked up card they can. Otherwise, it gets added to their hand. Players can also opt out of playing a card. If they choose not to discard a card during their initial turn, then they must pick up a card instead. They can also choose to not play this newly picked up card if they'd like. The next person in the rotation then begins their turn.

When a player has only one card left, they must shout "UNO" (meaning "one"). If they get caught with only one card without saying "UNO", they must pick up two cards from the draw pile. As soon as one player runs out of cards, the score is counted and the game resumes. If the draw pile runs out, reshuffle the discard pile to create a new draw pile.

The first player to reach 500 points will become the winner. Alternate ways of winning are listed in the official game rules.

Action Cards:
Draw Two: When this card is played, the next person to play must draw 2 cards and miss their turn. It can only be played on other draw two cards or a matching color.

Reverse: When this card is played is reverses the direction of play. It must be played on like colors or other reverse cards.

Skip: If this card is played, the next person in line for a turn will loose their turn without playing any cards. Play on a matching color or other skip cards.

Wild: This card can be played on top of any card. The player using it will choose what the color will be for the next played card.

Wild Draw Four: This is the same as a Wild card except the next player must draw four cards from the draw pile and looses their turn. The Wild Draw Four card can only be played when no other cards can be played from their hand.

Penalties:
Forgetting to shout "UNO" when left with only one card before they get caught will result in a two card penalty. Any player that make suggestions on what others should play will result in a two card penalty. If a player plays the wrong card and is caught, they must retrieve the wrong card, draw two and they loose their turn. If a Wild Draw Four card is challenged by the next player in turn (to see if it was played illegally), they get to see their hand. If the card has been correctly played, the challenger must draw 2 cards in addition to the 4. If it was played illegally, the offending player must draw 4 cards themselves.

Please keep in mind that the official Uno Cards rules and instructions could be different depending on the game version you have. The rules below are some of the exact directions that came in the original packaging and will teach you how to play Uno Cards. Download these original PDF game rules or print them for later use.

Share with us your comments, funny stories, tips, advice, strategies, creative ways to play, questions about how to play, problems with the directions or anything you want about Uno Cards. All submissions will be reviewed within 24 hours.

Hanna says:
This is our go to game for the kiddos. It's easy and fun to play. Learning how to play doesn't take long and the kids love playing Uno.
Dennis says:
I cannot find the UNO rule for when the earliest time the player can call UNO. For example: 1: Person can say UNO after he/she extracts the second to last card from his hand? 2: Person can say UNO when he touches the second to last car in his hard. 3: Person can say UNO simply when he has two cards in hand and is ready to play the second to last card.
Kyle says:
I love the game Uno. The game rules are so easy and simple to understand. Games that take forever to learn how to play drive me crazy. This game always goes with us on vacation. We have even tweaked the official Uno rules a bit when we want to play a different flavor of the game. The possibilities are endless.
Peggy says:
If you're down to only two cards left with one a wild card, do you have to play it? Is it ok to draw & save the wild card?
Jack says:
A must have on vacations. We always slip this game in our bags and play when we're stuck somewhere (which always seems to happen).
Sara says:
I have played this card game so many times with so many different people and I swear everyone plays it a little different. We get going and I say, wait, you can't do that. They respond saying yes, that's how we play it. Who knew?! Make sure you get your rules down before you start playing since there are so many different versions of how to play.
Alisha says:
Uno is one of the first card games I remember leaning how to play with my extended family. We all sat around the table and played (probably 15 people). Someone quickly explained the simple rules to me and we were off playing. Lots of fun memories with this game. An easy one to throw in your bag no matter where you go.
Carebear says:
I love UNO because I always beat my grandma lol
Walter says:
Ah, the memories of playing this with my buddies back in the day. Somehow we would always get in an argument over the rules and everyone had their own ideas of how to play Uno. Still a classic easy fun game.
Sushma says:
According to the rules WILD cards are used to change the color or WILD DRAW 4 cards are used to change the color & the next person has to pick 4 extra cards.