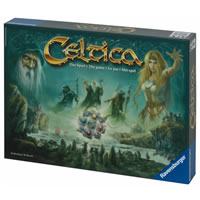 How To Play Celtica (Instructions)

Celtica is the game of heros. An Irish legend tells of some brave men that were given amulets. These amulets were considered sacred until the city was destroyed by the Vikings. Now, you and your opponents must find the pieces of these amulets and work to restore what once was.

Players will scour the board in the search for these missing amulet pieces. Celtica will be won by the player who can find the most pieces. Celtica is a great game full of mystery and life. Check out Celtica today and play it with your family. What will it take for you to become the king?

The game Celtica should come with the following components. These are based off of the original game and don't include components from any expansion packs or different editions.

Please keep in mind that the official Celtica rules and instructions could be different depending on the game version you have. The rules below are some of the exact directions that came in the original packaging and will teach you how to play Celtica. Download these original PDF game rules or print them for later use.

Share with us your comments, funny stories, tips, advice, strategies, creative ways to play, questions about how to play, problems with the directions or anything you want about Celtica. All submissions will be reviewed within 24 hours.

Vegan house says:
Thank you cardflopper! Your comment was really useful to us! This mistake is in the English rules, and massively changes the game. The French is correct according to the French speaking member of our group. Also, a further warning for those relying on the English rules: it's not clear in the English rules what players should do with their remaining cards for a specific druid once that druid reaches the end. The French rules make it clear that you can continue to play cards of that colour, but that nothing happens. In effect, you keep hold of these cards and they give you an option to skip your go.
cardflopper says:
Just a heads up; the English rules for this game have several errors. For example when you draw a druid card from a cult site, you do not have to play it on your next turn as the printed rules say. There were some mixups in the translation. If I recall correctly, the English and French sections of the rules are affected but the other languages such as German might be correct.
©2022 Board Game Capital - About Us