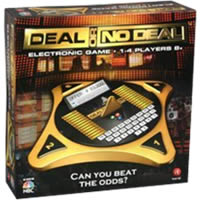 Deal Or No Deal Game Rules

How To Play Deal Or No Deal (Instructions)

Based off of the poplar TV Game, the Deal or No Deal game will put you in the hot seat. Players of Deal or No Deal choose a briefcase with a hidden amount of cash in it. The game gets tricky as 26 briefcases slowly get opened and your chances of having the million dollars either increases or decreases. Will you take the bankers offer or test your luck with your chosen case?

The game Deal Or No Deal should come with the following components. These are based off of the original game and don't include components from any expansion packs or different editions.

To try to make the best deal possible by either keeping the briefcase that you first choose or by getting an offer from your host/banker that’s worth even more.

Please keep in mind that the official Deal Or No Deal rules and instructions could be different depending on the game version you have. The rules below are some of the exact directions that came in the original packaging and will teach you how to play Deal Or No Deal. Download these original PDF game rules or print them for later use.

Share with us your comments, funny stories, tips, advice, strategies, creative ways to play, questions about how to play, problems with the directions or anything you want about Deal Or No Deal. All submissions will be reviewed within 24 hours.

Kendrew says:
I won because 1,000,000 is good. It''s very fine
Seth says:
This game used to be so big and was the thing to watch on tv. The board game/party game is also fun but without the memory of the tv show it doesn't have the full effect. Not a lot of strategy, mostly just a gamblers luck game.
Tom says:
I haven't read through all the rules yet but are they the exact same as the show? I've played a few tv game show games and they changed a few rules ruining it for me. I like it to be the authentic.
©2022 Board Game Capital - About Us